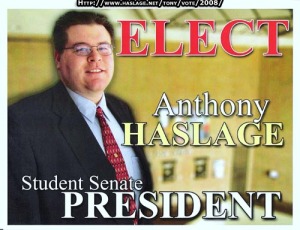 In 2004, Anthony unsuccessfully ran against the Student Senate President incumbent, Mark Layman. Since that time, Anthony has dedicated himself to improving the student experience at LCCC. While the student senate of any college holds no real power, the college administration appreciates the efforts made by students who attempt to make an unfair world at least a little bit fair while they are in college.

Thank you to all those who voted for me, I lost!

Elections will be held April 22 – 24, 2008. Lorain County Community College students can vote online at the school’s web site. University Partnership students can vote via paper ballot two ways. The first is at the University Partnership office on the first floor of the University Center building. The second is at the Student Life office on the second floor of the College Center building. Voting at either must be done during business hours.

As an exclusive feature to this web site, I figured I should give you, the voters, a little bit of enlightenment towards what I would like to do once in office. Below are a few ideas I have had over the years and obviously being in Student Senate is being part of a team, so while I can not guarantee everything I want to do will work for the entire Student
Senate, I will try my best to promote these ideas.

Below are the concerns of students I have met while campaigning. Some of their concerns have already been met and set in motion by the college administration, others I will inquire about when I am elected.

“I fully endorse your Student Senate Presidential run. You have the most experience and know the most about policy and procedure dealing with LCCC. As a former opponent of yours, my only concern was that you were the only one who might ever beat me. Good luck and I hope you finally get that seat I occupied for three terms. Go out with a bang and do what is best for the college. I completely support your campaign. Best wishes!”